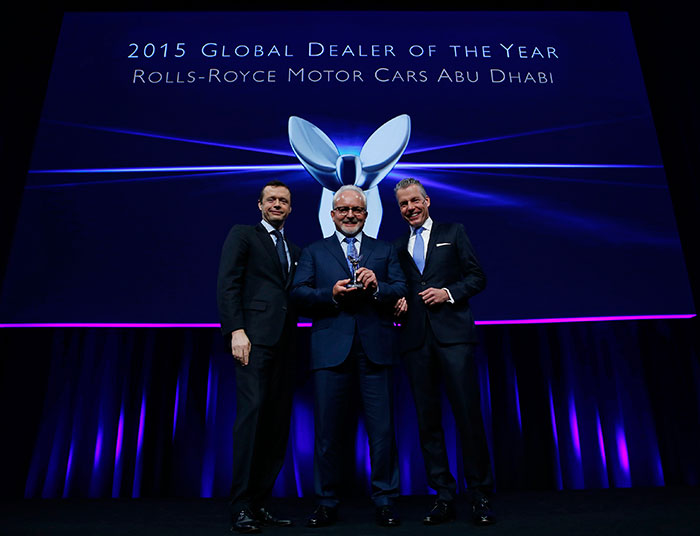 Abu Dhabi Motors, the exclusive dealer for Rolls Royce in Abu Dhabi Al Ain, emerged as the winner of the coveted Global Dealer of the Year award for the third straight year based on the company’s sales performance in 2015. Abu Dhabi Motors received the award, the fourth such award in its history so far at the annual Rolls-Royce Motor Cars World Dealer Conference that was held in Berlin recently. The awards are given away every year at the company’s World Dealer Conference which gives all members of the regional and international teams a chance to share success stories and things they have learned during the year. It also serves as a forum to interact and develop the strategy for the coming year, in line with Rolls-Royce’s global direction. This year, the Conference was held in Berlin.

The dealership received four accolades in total, including Regional Dealer of the Year for Middle East, Africa, Central Asia & South America, Best Bespoke Dealer, and Best Global Volume Contribution, in comparison to other dealerships in the marque’s global network.

Speaking after the World Dealer Conference, Arno Husselmann, General Manager of Abu Dhabi Motors said: “It is an absolute honor to receive such accolades from Rolls-Royce Motor Cars and to be recognized by both our international and indeed regional colleagues for our achievements. This was another great year for us at Abu Dhabi Motors, where we achieved several milestones for the Rolls-Royce brand.”

He attributed the company’s success to the phenomenal cars offered by Rolls-Royce, the dedication and passion of the Abu Dhabi Motors team and the support from the company’s loyal customer base. He expressed his hope that the company would be able to build on this positive start in this year and in the years to come.

Abu Dhabi Motors had already been won ten awards at the Regional Dealer Awards which were held in Doha in January. These included awards for the dealer with the highest sales, the highest sales in relation to the targeted sales growth, the award for Brand Ambassador for 2015 (awarded to Joseph Tayar), and three Certificates of Excellence for achievements in Sales and Aftersales.

Abu Dhabi Motors is known the world over for its unique Bespoke concepts, and has been recognized as the outlet with the highest sales of bespoke cars for the past five years. In 2015, the company had launched its locally inspired Bespoke collections like Nautical and Al Adiyat, in addition to a Bespoke Anniversary collection consisting of 10 unique cars to mark the 30th anniversary of the dealership. This definitely contributed to its success in securing the award for the Best Bespoke Dealer of the Year.