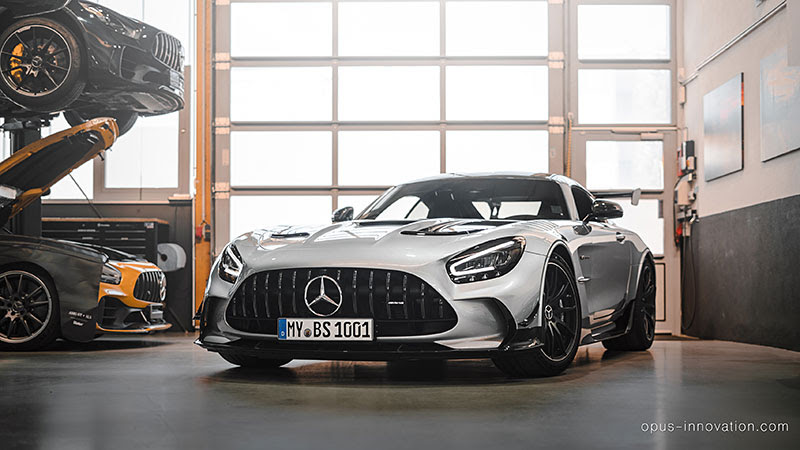 As the world’s first tuner, OPUS Automotive GmbH received a Mercedes-AMG GT Black Series a few weeks ago and is already presenting various power levels with up to 1111 hp for 2021.

OPUS is located in the same business park on the Nürburgring, where not only racing teams but also well-known vehicle manufacturers have settled and it is no coincidence that OPUS moved into the former test center of Mercedes-AMG GmbH in Gottlieb-Daimler-Straße.

Of course, it is still too early to speculate about lap times of the GT Black Series modified by OPUS, but it should not only be mentioned in passing that this is the fastest car in the standard, street-legal category, but not subsequently modified sports car on the Nordschleife of the Nürburgring. So we can be more than excited!

The so-called “OPUS Binary Editions” in the levels 1111 and 1001 hp will be released for sale, probably from June 2021, after hard testing on the dynamometer, on the road and countless laps in the green hell of the Nürburgring and on other racetracks.

At least with the highest expansion stage for the time being, the AMG GT Black Series modified by OPUS will even surpass the AMG ONE by 57 hp, whose system output is specified as 1054 hp.

One might get the idea that this is a relatively high amount of power for a rear-wheel drive vehicle. The solution:
OPUS always limits the torque to the “bare minimum” at all power levels, out of consideration for the drive train and traction. In combination with the ex-works sophisticated aerodynamics, the performance is by no means over-portioned. OPUS also promises suction-like characteristics with a linear performance curve for all performance levels, i.e. increasing performance parallel to the speed.

If these performance kits seem too aloof for you, you just have to wait until mid-April, when the performance levels with 825 and 920 hp will be available.

With the exception of the 825 PS expansion stage, which takes place purely via software intervention in the engine and transmission control unit, all performance kits contain further, sometimes very extensive changes to the hardware:
These range from modified turbochargers and a transmission reinforcement to a revised engine including special forged pistons , reinforced connecting rods, machined cylinder heads and a completely modified fuel system.

The performance packages mentioned will be rounded off in just a few months with super-light bikes and aerodynamic add-ons, but OPUS does not want to give any further details.

So much for the information so far on the tuning components for the true shooting star named GT Black Series.

Only the name OPUS raises the following question:
Who is this supposedly new star in the Mercedes tuning segment?

OPUS is a newcomer only in name. In the development workforce around the managing director, Dipl.-Ing. Lukas Domogalla, is a team that has been active in the automotive segment for 20 years, which has meanwhile worked as a sales representative for a well-known American company as well as an independent development and test center.

“The already different market requirements required an adjustment of the business model of our company at the latest with the current global crisis”, says the OPUS managing director. “Last but not least, it also means that standing still equals regression and that nothing is as constant as change, which is why we are very much looking forward to continuing to set benchmarks in the industry during this time after the restructuring.”

Especially with regard to the AMG GT and especially the GT R, the team from the Nürburgring probably has the most in-depth expertise in the world and will certainly continue to demonstrate superiority, not least with the latest Affalterbacher top model.
After all, the team from Meuspath is referred to in the scene as the “Home of the AMG GT” for a reason.

“By defining the word ‘opus’ as an artistic, musical and scientific work, the direction of the coming products is given. We are always concerned with the most perfect interplay of the individual vehicle components, which only result in a ‘symphony’ if they are precisely coordinated with one another, ”continues the OPUS managing director.

Speaking of music: not only fans of the AMG GT Black Series have certainly noticed that the new noise regulations also allow the new 4.0-liter V8 biturbo with flat crankshaft, internally known as the M178 LS2, to give at most a gentle hiss in series production.

For this, too, OPUS has a solution:
For use on the racetrack or for non-European countries, newly developed downpipes with sport cats will be available from mid-April 2021, the installation of which eliminates the need for the standard particle filter.