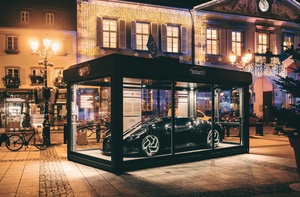 A special Christmas present for the city of Molsheim

Christmas trees in every city center, fairy lights and illuminated stars as far as the eye can see – no region in France is as festively decorated at this time of the year as Alsace. Not only are Christmas markets in Strasbourg and Colmar well known, even Molsheim, the headquarters of Bugatti has its own Christmas market. This year, the disappointment of avoiding any gatherings in the run-up to Christmas due to Covid19 was all the greater. The city of Molsheim had to cancel its Christmas market at the Place de l’Hôtel de Ville.

In order to maintain a certain level of festivity, the French luxury brand decided to offer a special presentation that will be on exhibit right next to the beautifully decorated Christmas tree. Since last week, passers-by have been able to marvel at the Bugatti La Voiture Noire1, safely locked in a glass container.

“I am very grateful to Bugatti for this wonderful gift to our city. Now all residents of Molsheim have the very special opportunity to admire this unique masterpiece, the “La Voiture Noire”, of which Ettore Bugatti would certainly have been very proud,” says Laurent Furst, Mayor of Molsheim at the inauguration of the glass container last week.

“The Bugatti brand originated here in Molsheim, the city in which Ettore Bugatti founded his brand and started to manufacture his own automobiles more than 110 years ago. Molsheim thus became the cradle of our success – a success that continues to this day,” emphasizes Christophe Piochon, Site Manager and Managing Director Production and Logistics, who was also present at the inauguration of the installation. “Of course, nothing can replace the Molsheim Christmas market. However, it is important for us to bring joy to people from the region in these difficult times ”.

La Voiture Noire will be exhibit in the Molsheim city center until the end of March. It is the show car of the one-off model, which celebrated its world premiere at the Geneva Motor Show last year to mark the 110th birthday of the Bugatti brand. The hyper sports car, which has already been sold for 11 million euros (net), pays homage to the legendary Type 57 SC Atlantic by Jean Bugatti, which went missing at the beginning of the World War II and was never found again.