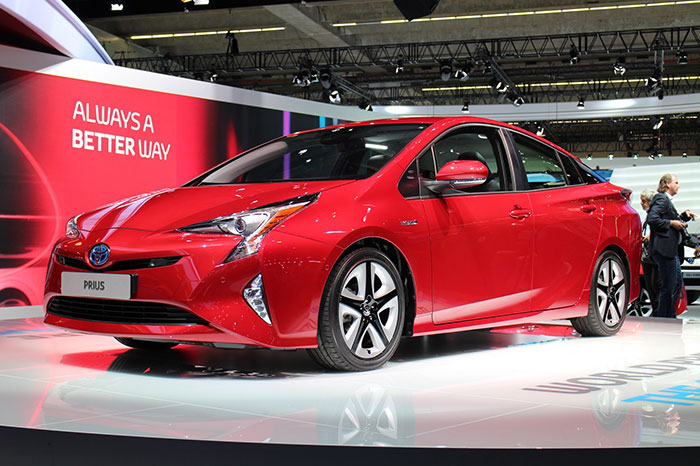 Toyota Prius—Leading from the Front

The Toyota Prius has been leading from the front ever since it was launched. The model routinely makes it to top ten lists of the cars that changed the world. BBC Top Gear and Forbes list the Prius as the first true hybrid car that achieved commercial and critical acclaim. Developed as a concept in 1995 and released two years later, this midsize hatchback enjoyed domestic success in Japan before conquering the world in 2003. At a time when SUVs ruled international roads and gasoline was cheap, the Prius was a breath of fresh air—a roomy, fuel-efficient, hybrid car that rekindled the world’s longstanding love affair with Japanese quality. The car takes its name from the phrase “to go before” or “forerunner”—a nod to the fact that it was the first commercial hybrid car that taught the world about a cleaner, more efficient and cost-effective way to travel.

Toyota sold just over 6,500 Prius hybrids in the year 2000 when the car made its debut in the United States and in Europe. Meanwhile, back in Japan, the car’s unique styling and hybrid power train caught the imagination of consumers, resulting in triple the number of anticipated orders. While the 2001 Prius set the bar for fuel efficiency, subsequent releases improved on design and power train efficiencies to ramp up the car’s mileage from 52 miles per gallon to 60 miles per gallon in 2006. 2003 was a watershed year for the Prius, with celebrities arriving at the Oscars in special Priuses provided by Toyota through international environmental organization Global Green. Being efficient had become the cool thing to do and nearly everyone who was anyone in Hollywood was seen in a Prius. Leading stars of the day—Cameron Diaz, Leonardo DiCaprio, Pierce Brosnan, Meryl Streep, David Duchovny, Don Cheadle, Patricia Arquette, Jackson Browne, Ted Danson, Jeff Goldblum, David Hyde Pierce and Susan Sarandon—endorsed the car in the best way possible—by owning and driving one.

As the world turned its eyes on the Prius, competitors such as Honda began to see that the winds were changing and released their own hybrid cars into the market. However, Toyota stayed firmly in the limelight, causing governments around the world to redefine the laws governing carpooling and lane preferences to favor people who invested in eco-friendly cars. The Prius became the vehicle of choice to feature the company’s hybrid drive train technology, Hybrid Synergy Drive. The system improved overall performance and efficiency. The car’s continued success saw it win two consecutive “Car of the Year” awards in 2004 and 2005 and establish the Prius brand as the final word in environmentally friendly vehicles.

The third generation of the Toyota Prius featured sleeker, urbane exteriors and improved fuel efficiency, clocking over 50 miles per gallon, making it the most efficient car on the road in 2009. The car was awarded Car of the Year in Japan and stretched the boundaries of eco-friendly operation with the use of plant-based bioplastics. Right up to the fourth generation in 2015, the Prius continued to be one of the largest-selling hybrid cars, exceeding 2 million cars sold in 2010, slowing down only in 2014 as other large competitors began to establish their presence in the market. As the Prius is redesigned for yet another generation of automotive excellence, the light of its legacy as the first car that truly went “green” continues to shine on.