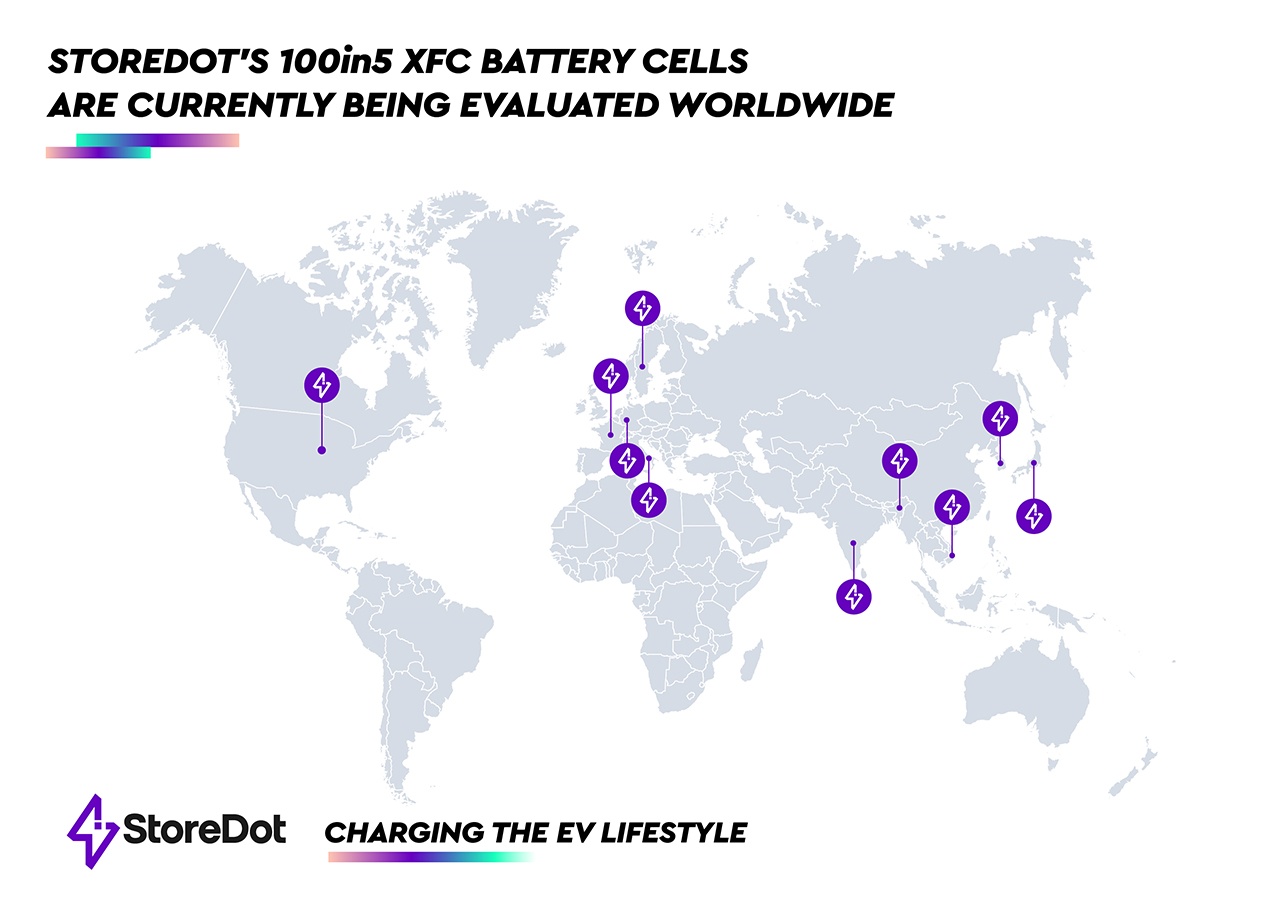 StoreDot, the pioneer of extreme fast charging high energy battery solution for electric vehicles, has revealed today that its groundbreaking XFC batteries and systems are now being tested by over 15 global automotive brand manufacturers, and that it has additional potential manufacturing partnerships in the pipeline for this year.

Dr Doron Myersdorf, StoreDot CEO “This announcement is yet another important milestone for StoreDot. We’re delighted that so many of the world’s leading automotive manufacturers are testing both our XFC cells and their integration into next generation electric vehicle architectures, and we are receiving positive feedback about the real-world viability of our technologies. This is an extremely encouraging endorsement from companies that are now vying to become the first to use our leading 100in5 battery cells in their production vehicles. We are now certain that the first mass produced StoreDot cell will be commercially available in 2024.”

Last year StoreDot revealed its ‘100inX’ strategic technology roadmap. This featured 100in5, 100in3 and 100in2 of miles per minute of charging – three generations of StoreDot technologies of silicon-dominant XFC, semi solid state and post-lithium architecture. The roadmap reaffirms that the timings for these will be delivered over the coming decade with 100in5 by 2024, 100in3 by 2028 and 100in2 by 2032.

The company now has a growing network of strategic global partnerships and investors, spanning the entire battery ecosystem. To date it has received investments from global automotive manufacturers including Daimler, Ola Electric, Polestar, VinFast and Volvo Cars.

StoreDot is the pioneer and global leader of extreme fast charging (XFC) electric vehicle batteries that overcome the critical barriers to mainstream EV adoption – range and charging anxiety. The company has revolutionized the conventional Li-ion battery by designing and synthesizing proprietary organic and inorganic compounds, optimized by Artificial Intelligence algorithms, to make it possible to charge an EV in under ten minutes – the same experience as refuelling a conventional combustion engine car.

Through its ‘100inX’ product roadmap, StoreDot’s battery technology aims to deliver ‘Range on Demand’: 100 miles charged in 5 minutes in 2024, 100 miles charged in 3 minutes by 2028, and extreme energy density solution enabling 100 miles to be charged in 2 minutes by 2032. StoreDot’s strategic investors and partners now include: Daimler, BP, VinFast, Volvo Cars, Polestar, Ola Electric, Samsung, TDK, and its manufacturing partner EVE Energy. StoreDot’s agnostic technology is designed to utilize existing standard production lines with no changes to process or equipment. In 2022, the company achieved a world first by demonstrating a live extreme fast charging of an EV battery cell in 10 minutes capable of over 1000 consecutive XFC cycles. StoreDot is on target for mass production readiness of 100in5 technology by 2024.