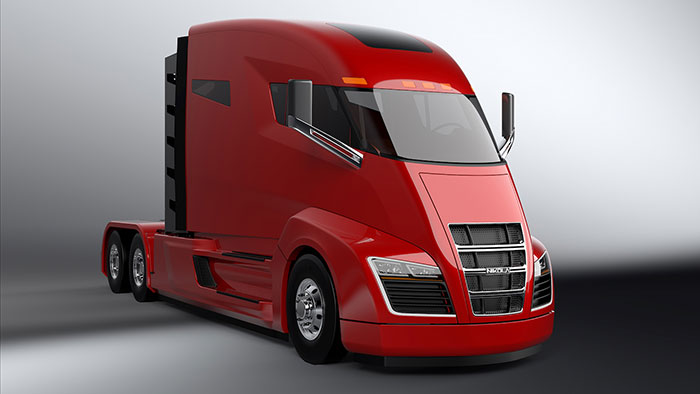 Rise of the Super-Truck

If Tesla’s revolutionary foray into the auto industry represents a major step in automotive technologies, Utah-based auto manufacturer, the Nikola Motor Company seeks to replicate the Tesla’s runaway success with its new line of super-truck—the Nikola One. While the concept of a super-truck has always been the subject of much industry interest and speculation, the Nikola One seeks to be the first eco-friendly mega-rig.

Traditionally, the role of the super-truck has been defined by its size and engine specifications and the Nikola One is no exception. However, to build a super-truck that goes beyond the traditional definition of sustainability and challenges the capabilities of several hybrid high-performance cars is no small feat. Under the hood, the Nikola One boasts a behemoth 2000-horsepower engine that uses turbines the charge the 6×6 electric drive and the gargantuan 320 kWh battery that is comprised of 32,000 lithium-ion batteries. The truck also features recharging and saving brakes, twin gearboxes, an 800-volt battery cooler, a turbine that charges the battery. Despite an otherworldly array of performance capabilities, the uniqueness of the Nikola One is in its sustainability and clean energy quotient. This becomes significant as manufacturers grapple with the problem of increasingly stringent carbon-balance guidelines. Studies by the Environmental Protection Agency reveal that heavy-duty trucks running on diesel generate significantly higher levels of nitrogen oxides—a fact is set for rapid, transformational, and disruptive change because of the increased accountability demanded by environmental agencies, governments, and the international community. The Nikola One is expected to use its own fuel network of CNG refilling stations that are capable refueling the super-truck’s 150-liter natural gas tank achieving an effective range of approximately 1,900 kilometers on a single filling.

The Nikola One features a fuel-agnostic system that can be run on conventional diesel, natural gas, and electricity—an advancement that works alongside innovations such as the vehicle’s aluminum fifth wheel. In the long term, the use of super-trucks could define a new era of transportation technology that centers on the use of green trucks to deliver sustainable performance that is affordable and at a level higher than any diesel vehicle. The inherent scalability of such a CNG-electric system represents fuel and operational cost reductions worth millions of dollars for fleet operators. However, the successful implementation of such a system remains to be proven. Another first for the Nikola One is the use of touch screen controls to access and modify several vehicle parameters including wheel torque, battery levels, fuel reserves, navigation and potentially, on-road telemetry. In many ways, this truck forms a template for the super-truck of the future and should it enjoy a profitable run, could shape the natural gas, design, and hybrid automotive industries.

In keeping with several sound principles of cabin design, the Nikola One features a large panoramic windshield for improved visibility. The cabin is designed to be aerodynamically sound and a lower center of gravity keeps the truck stable in adverse operating conditions. The turbine, battery, and motors are located below the truck’s frame rail, lending stability and greater control over the super-truck. The uniqueness of the Nikola One is in the fact that the whole is vastly greater than the sum of its parts—combining multiple automotive technologies with innovative and environmentally sustainable systems.