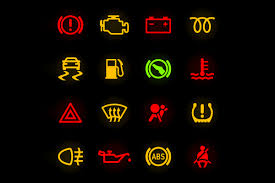 While 73 percent of the Americans who participated in the survey failed to recognize the oil pressure warning light, 40 percent did not recognize the coolant temperature warning light and 30 per cent did not understand the tire pressure symbol. These parameters point to key parameters of vehicle health and the lack of knowledge about them definitely gives cause for concern.

The coolant warning light warns the driver when the coolant temperature is higher than normal, and the engine is almost overheating. If the motorist continues to drive, he risks engine failure and could incur heavy repair bills. Just knowing the meaning of this symbol can help you save a significant amount of money in the long run.

Driving on when the tire pressure warning symbol comes on can also be catastrophic as it can end up causing a blowout and the driver could lose control. This warning light is critical.

Those who were older demonstrated a significantly higher level of knowledge when compared to their younger counterparts. 55- to 64-year-olds scored noticeably higher than any other age demographic, including their 65 and older counterparts. Motorists aged 35 to 44 scored higher than drivers aged 45 to 54.

It is not really clear whether knowledge about cars is declining because those belonging to the younger generation are not bothering to learn or whether it is because motor cars are more complicated nowadays and have a greater number of parts.

The longer these warning symbols are ignored, the greater the extent of the damage to the vehicle. Maybe it is just as well that sophisticated onboard diagnostics systems and connected vehicles which have the technology to keep drivers informed about their vehicles at all times are being developed. More and more people are depending on their mechanics rather than on their own knowledge of cars.