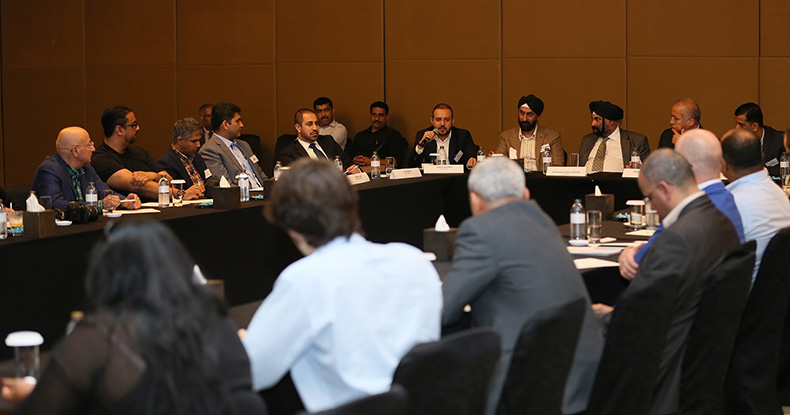 Dubai, UAE: Automotive industry professionals have weighed in on the debate about the Middle East’s tyre industry, with the future headed for positive growth, as the sector swings from a buyers’ to a sellers’ market.

More than a dozen key figures from the regional tyre industry gathered to discuss future growth prospects, challenges, and the way ahead at the 1st Automechanika Exclusive Tyre Gathering today (7th March) in Dubai.

Varga Group is the Middle East representative of Marshal, Kenda, Deestone, Achilles and Alexia tyre brands.  Moaref said the region has reached the bottom of its sales cycle.

“The tire market normally goes through five year cycles where one sees five years of a buyers’ market and five years of sellers’ market”, said Moaref. “I believe it bottomed out by November 2016 and we’re now witnessing a change from 5-6 years of price decline to a price incline market.  There’s a small chance prices might steady out after a few months but we won’t see a decline in the near term.”

Moaref’s comments were shared by Aqel, whose Central Trading Company represents more than 25 auto aftermarket brands, including Michelin, Goodyear, Dunlop, and Kormoran tyres. Aqel said the region is on an upward trend due to recent price increases in raw materials such as rubber after three years of decline.

“There will be positive growth coming from price increases but we don’t expect much growth in tyre volumes,” said Aqel, who added there were some challenges ahead to brace for as well. “We were facing the price drop challenge, now we will face the price increase challenge.”

The 1st Automechanika Exclusive Tyre Gathering was hosted by Messe Frankfurt Middle East, organiser of Automechanika Dubai, the region’s largest automotive aftermarket trade fair, which runs from 7-9 May 2017 at the Dubai International Convention and Exhibition Centre.

Among the other hot topics up for discussion was future trends and innovations in a Middle East market where, according to Frost & Sullivan, revenues from tyre sales will reach US$3.6 billion in 2021, growing nine per cent annually from US$2.4 billion in 2016.

“These are dynamic markets and contribute a good share to all major tyre brands in the replacement market,” said Aqel.  “Keeping in mind that the GCC region in particular has a very high GDP with high purchasing power when compared to other markets in the region.

“However, it needs to be further regulated and controlled, especially in the UAE, as the country is a very open market and a hub for re-export.  We’re still considered as an emerging market here in UAE and there’s still a lot of development required.”

Added Moaref: “The UAE is probably going to have the biggest percentage growth for us in the next couple years leading to the Expo 2020 Dubai. On the other hand, Africa has a bright future and we predict a resumption of sales soon in some African countries that were affected by currency devaluations and the oil slump.”

“We believe that we are headed for a good year considering the recent upward trend in prices. When prices are on the upside purchasing increases and there’s capital inflow into our market. Tyres are after all a commodity and people buy on a bullish market.”

The 1st Automechanika Exclusive Tyre Gathering comes amid growing interest from tyre manufacturers and suppliers from across the globe at Automechanika Dubai 2017, which has a dedicated Tyres & Batteries product section featuring more than 200 exhibitors.

Ahmed Pauwels, CEO of Messe Frankfurt Middle East, said: “Today’s Automechanika roundtable is designed to promote dialogue between key market figures and develop profitable avenues of idea exchange that is not only beneficial to the region, but to the industry as a whole.”

“Tyres & Batteries constitute a significant and growing product group at Automechanika Dubai, with 35 per cent of the 30,000-plus trade visitors to the show expressing interest in this dedicated section.  Space taken up too has nearly tripled over four years since 2012, underlining its huge drawing power to exhibitors worldwide,” he added.

The annual three-day event returns with its popular Truck Competence initiative, where more than 1,000 exhibitors will showcase their products dedicated to the entire value chain in the truck sector, from truck parts and accessories, to workshop equipment, body repairs and care.

Its global influence is underlined by the presence of more than 20 country pavilions and 35 international trade associations, while 90 per cent of exhibitors, and 51 per cent of visitors are expected to come from outside of the UAE.

Automechanika Dubai 2017 will return with the popular Automechanika Academy – a series of seminars, presentations, and workshops about key issues and regulations that affect the automotive aftermarket, and the African Buyer-Seller Meet, connecting suppliers with buyers from the world’s second largest continent.  More information about Automechanika Dubai is available at: www.automechanikadubai.com.